THE HISTORY OF SOUL FOOD 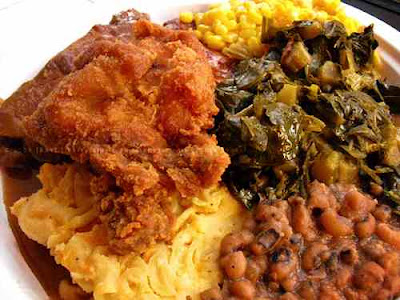 The term, ‘Soul Food’, was created in the 1960s by Southern African-Americans, in honor of their ancestors. The food, itself, dates back to when Africans first touched the shores of Jamestown, Virginia, as slaves, with their indigenous foodstuffs; and evolved over the centuries, through influences from their new home and from around the globe, as European slavemasters and explorers arrived, and eventually immigrants flocked to the United States.
Many slaves had been farmers and fisherman, in their native lands, and introduced several plants, such as black-eyed peas, sweet potatoes, okra and watermelon as part of American crops. They were also forced to eat the discarded food, which had been part of the ingredients used to prepare their masters’ meals, such as the tops of dandelions and beets, the pigs’ feet and oxtail. Over time, they introduced other greens, such as collards, turnips and mustard and incorporated food such as corn, which was so plentiful in The South and a staple of the Native-American diet.
The slaves cooked their meals over open pits, or in fireplaces, in big iron swing pots and skillets, and often had to fry their food and use a lot of salt to preserve it and sugar to give it taste. Despite limited ingredients and tools, they managed to create delicious meals for their families; and mealtime was the only time they had to peacefully spend together, when not working out in the fields or in the master’s home. The slaves also did not have the education, nor the materials, to write down their recipes, so kept them all in their heads and verbally shared them.  Of course, they had to cook with their senses, so even today, this is often why you see phrases in recipes such as: ‘pinch of salt’ and ‘bake until golden brown’; and that many cooks do not use cookbooks. 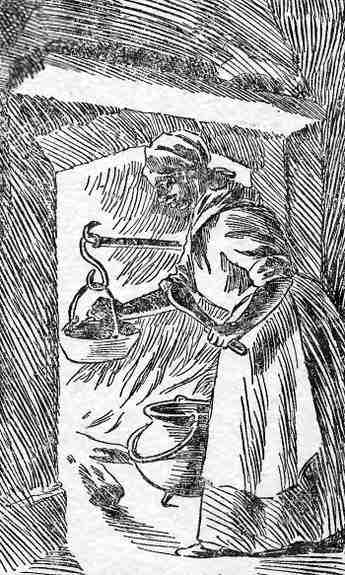 Soul Food has evolved over the centuries and can be quite gourmet now – especially in upscale restaurants.  Over time, post-slavery, other ingredients, such as chicken and fish and better cuts of beef and pork were introduced. There are also now many ways to adapt recipes to be healthier versions of their originals because hypertension and diabetes have become so prevalent in the Black Community, primarily due to the tradition of how the food was first prepared. Soul Food also has spread across the United States, as slaves escaped and Southern African-Americans migrated to the North.
What has not changed is the mouth-watering taste and tradition of preparing and eating it with family and friends to create memories, which are always good for the soul. 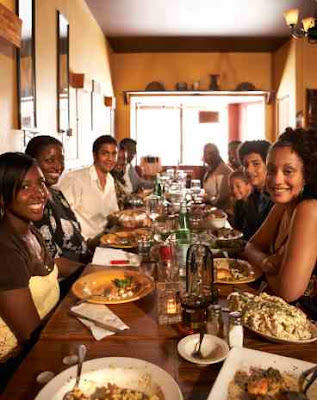 Here is a delicious recipe, using okra, one of the vegetables, which West Africans first introduced to .  Give it a try! For my non-American friends, here is a recipe converter to help you.
http://southernfood.about.com/library/info/blconv.htm
Bon Appetit!
Okra Fritters
Chef Scott Peacock, Watershed Restaurant, Decatur, Georgia 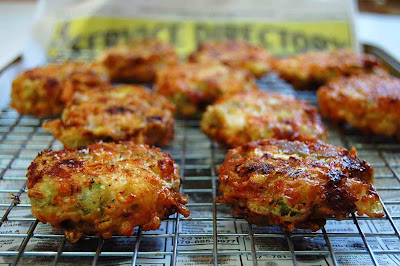 Put the cornmeal, flour, 1 teaspoon of the salt, and baking powder in a mixing bowl and stir well with a whisk to blend. In separate bowl, whisk together the egg and water and stir into the dry ingredients, mixing only until moistened.
Sprinkle the remaining salt and freshly ground pepper over the onion and sliced okra and toss lightly. Fold the vegetables into the batter.
Pour 1 inch of oil into a heavy skillet and heat to 340-350 degrees F.  Spoon the okra batter by heaping tablespoons into the hot oil. Fry until golden brown on one side, then carefully turn and continue until both sides are browned and the fritters are cooked through. Remove from the skillet and drain well before serving.
Sources: Soul Food Advisor, Southern.com, Wikipedia, MSNBC, Google
Posted by Zena at 5:15 AM