Earlier this week, Xoliswa Ndoyiya, who has been Mr. Nelson Mandela’s head chef for almost 20 years, published a cookbook, containing recipes of his favorite foods. The cookbook is entitled, Ukutya Kwasekhaya, which means ‘Home Food’ in isiXhosa, Nelson’s first language. 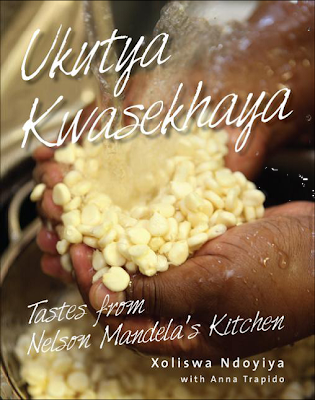 Nelson Rolihlahla Mandela was born in Transkei, South Africa on . He was actually born, Rolihlahla Dalibhunga, and was given his English name, Nelson, by a teacher at his school. In South Africa, he is often called by his clan name: "Madiba".
His father was Chief Henry Mandela of the Thembu Tribe and counsellor to the Thembu Royal Family . Educated at University College of Fort Hare, where he met his lifelong friend, Oliver Tambo, and the University of Witwatersrand, Nelson qualified in law in 1942. He joined the African National Congress (ANC) in 1943, first as an activist, then as the founder and president of the ANC Youth League.
A passionate man for his people, Nelson became engaged in resistance against the ruling Afrikaner National Party's apartheid policies, when the party won the election in 1948.  He continued his active participation in politics and led prominently in the ANC's 1952 Defiance Campaign and the 1955 Congress of the People, whose adoption of the Freedom Charter provided the fundamental basis of the anti-apartheid cause. During this time, Nelson and his friend, Oliver Tambo, set up South Africa’s first black law frim, Mandela and Tambo, providing free or low-cost legal counsel to many blacks who lacked attorney representation.
Nelson went on trial for treason from 1956-1961 and was acquitted in 1961.
After the banning of the ANC in 1960, Nelson argued for the setting up of a military wing within the ANC. In June 1961, the ANC executive considered his proposal on the use of violent tactics and agreed that those members who wished to involve themselves in Nelson's campaign would not be stopped from doing so by the ANC. This led to the formation of Umkhonto we Sizwe. Nelson was arrested in 1962 and sentenced to five years' imprisonment with hard labor. In 1963, when many fellow leaders of the ANC and the Umkhonto we Sizwe were arrested, Nelson was brought to stand trial with them for plotting to overthrow the government by violence. His statement from the dock received considerable international publicity. On , eight of the accused, including Nelson, were sentenced to life imprisonment. From 1964 to 1982, he was incarcerated at Robben Island Prison, off Cape Town; thereafter, he was at Pollsmoor Prison, nearby on the mainland.

During his years in prison, Nelson Mandela's reputation steadily grew. He was widely accepted as the most significant black leader in South Africa and became a potent symbol of resistance as the anti-apartheid movement gathered strength. He consistently refused to compromise his political position to obtain his freedom. 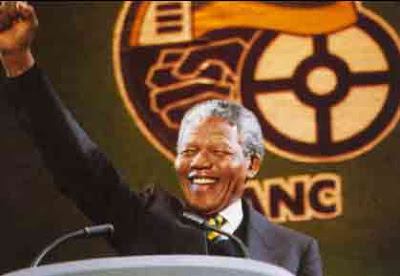 Nelson Mandela was released from prison on February 11, 1990. After his release, he plunged himself wholeheartedly into his life's work, striving to attain the goals he and others had set out almost four decades earlier. In 1991, at the first national conference of the ANC held inside South Africa, after the organization had been banned in 1960, Mandela was elected President of the ANC, while his lifelong friend and colleague, Oliver Tambo, became the organization's National Chairperson. During the course of his presidency, a wide range of progressive social reforms were enacted by Nelson’s government, aimed at reducing long entrenched social and economic inequalities in South Africa. 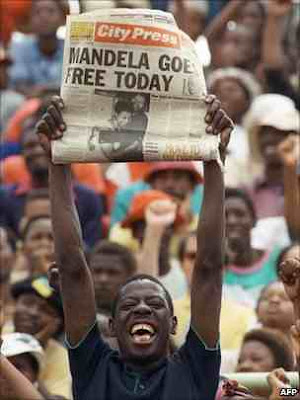 Since his retirement, one of Nelson’s primary commitments has been to the fight against AIDS, which is so prevalent in Africa. He gave the closing address at the XIII International AIDS Conference in 2000, in Durban, South Africa. In 2003, he lent his support to the 46664 AIDS fundraising campaign, named after his prison number. Three charitable organizations associated with Nelson have been established: the Nelson Mandela Foundation, the Nelson Mandela Children's Fund, and the Mandela Rhodes Foundation.
Soon after Nelson was released from prison, he hired Xoliswa Ndoyiya to be his cook. She has been cooking delicious, South African dishes for him, ever since, to sustain him and to feed his soul. At 93-years-old, Madiba still enjoys the lovely meals that Xoliswa prepares for him.  Here is an interview of her speaking about her experience.  http://news.sky.com/home/world-news/article/16162012
﻿

Below, is one of the recipes from her cookbook. Perfect chicken soup for a cozy winter’s night.
Chicken soup
Serves 4 – 6 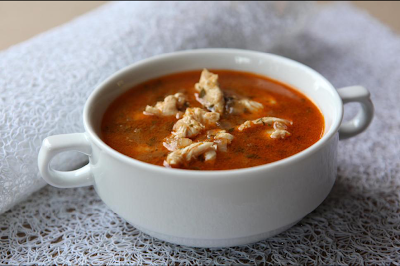 Ingredients:
Recipe converter here:  http://southernfood.about.com/library/info/blconv.htm
Heat the oil in a pot and fry the onion, garlic and paprika until the onion is soft and golden, for about 5 minutes.
Add the chicken and cook over a medium heat for about 5 minutes.
Add the tomatoes, water, stock and parsley and cook until you have a thick, wholesome soup, about 20 minutes.
Season and serve hot.
Sources: Wikipedia, Nobel Prize, Google, Bing, , Sky News, Xoliswa Ndoyiya
Posted by Zena at 4:31 AM